Tighter regulation around Initial Coin Offerings (ICOs) would make them a more attractive financing option, according to a poll conducted by Euromoney Institutional Investor Thought Leadership on behalf of Baker McKenzie. (For a refresher on the topic see ICOs: Not for the Faint-Hearted).

More than half the respondents to the poll said regulation would be positive for ICOs, compared to only 15% that fretted it would undermine returns.

The finding is interesting given that cryptocurrencies originally attracted a disproportionate number of people of a more libertarian persuasion. The early growth of bitcoin, the first digital currency to gain mainstream recognition, was driven largely by people sceptical about the influence central banks and regulators were having on economies and fiat currencies. For many in the bitcoin space the idea of regulating the currency remains highly controversial. 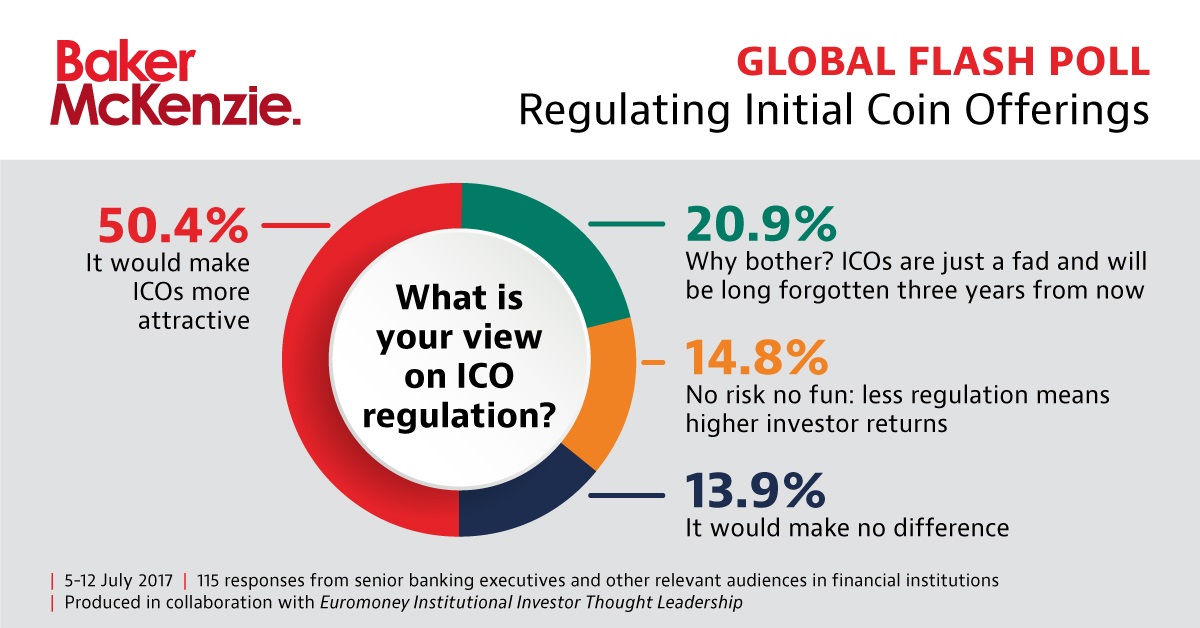 On one level the poll therefore highlights the maturing of the digital currencies business, with its early adopters increasingly outnumbered by financial traditionalists with mainstream regulatory concerns around fraud and consumer protections. As digital currencies have grown and attracted interest from the broader public, those early dogmas around secrecy have been superseded by calls for increased transparency.

Equally interestingly, 21% of respondents suggested ICOs are a fad that will soon be forgotten, and that regulating them is therefore pointless. This highlights a level of scepticism that is to some extent reflected in attitudes to other innovations coming out of fintech generally and digital currencies in particular.

But there is no doubt that scepticism is particularly prevalent with ICOs, the first of which occurred only four years ago with the offering of Mastercoin. ICOs have become a relatively hot topic for a very small niche of people and technology companies, but have not yet earned a track record to inspire confidence in either the broader public or traditional financial circles. Many suspect ICOs will prove fertile ground for fraudsters and that one big scandal could deal a regulatory deathblow to the entire industry.

The poll shows some still see regulators as largely impotent when it comes to overseeing developments on the innovative frontiers of finance, inevitably several steps behind the people they oversee. They failed to appreciate the risks regulated institutions were taking with securitised debt in the run up to the financial crisis, despite that activity taking place in plain sight, and some clearly do not expect them to fare any better in their oversight of the emerging digital currencies space.

However, with only 14% saying regulation would make no difference to ICOs, this cynical view is in a clear minority. Regulators will be encouraged that the majority still value their efforts in safeguarding the integrity of financial markets. It is now down to them to work out how best to deliver that goal.

The poll, which ran for one week in July, drew responses from 115 senior banking executives and other financial practitioners, with a skew towards people with responsibilities around fintech, digital currencies, and blockchain technology.